A framework for out-of-core and parallel execution

The main function for using Dagger is spawn:

or @spawn for the more convenient macro form:

When called, it creates an EagerThunk (also known as a "thunk" or "task") object representing a call to function f with the arguments args. If it is called with other thunks as inputs, such as in Dagger.@spawn f(Dagger.@spawn g()), then the function f gets passed the results of those input thunks. If those thunks aren't yet finished executing, then the execution of f waits on all of its input thunks to complete before executing.

Thunks don't accept regular keyword arguments for the function f. Instead, the options kwargs are passed to the scheduler to control its behavior:

There are also some extra kwargs that can be passed, although they're considered advanced options to be used only by developers or library authors:

The thunks p, q, r, and s have the following structure: 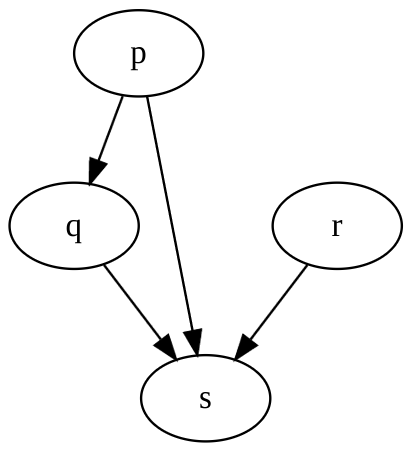 The final result (from fetch(s)) is the obvious consequence of the operation:

Dagger's @spawn macro works similarly to @async and Threads.@spawn: when called, it wraps the function call specified by the user in an EagerThunk object, and immediately places it onto a running scheduler, to be executed once its dependencies are fulfilled.

One can also wait on the result of @spawn and check completion status with isready:

One can also safely call @spawn from another worker (not ID 1), and it will be executed correctly:

This is useful for nested execution, where an @spawn'd thunk calls @spawn. This is detailed further in Dynamic Scheduler Control.

If a thunk errors while running under the eager scheduler, it will be marked as having failed, all dependent (downstream) thunks will be marked as failed, and any future thunks that use a failed thunk as input will fail. Failure can be determined with fetch, which will re-throw the error that the originally-failing thunk threw. wait and isready will not check whether a thunk or its upstream failed; they only check if the thunk has completed, error or not.

This failure behavior is not the default for lazy scheduling (Lazy API), but can be enabled by setting the scheduler/thunk option (Scheduler and Thunk options) allow_error to true. However, this option isn't terribly useful for non-dynamic usecases, since any thunk failure will propagate down to the output thunk regardless of where it occurs.

Alongside the modern eager API, Dagger also has a legacy lazy API, accessible via @par or delayed. The above computation can be executed with the lazy API by substituting @spawn with @par and fetch with collect:

or similarly, in block form:

Alternatively, if you want to compute but not fetch the result of a lazy operation, you can call compute on the thunk. This will return a Chunk object which references the result (see Chunks for more details):

Note that, as a legacy API, usage of the lazy API is generally discouraged for modern usage of Dagger. The reasons for this are numerous:

Dagger relies heavily on communication between workers to operate. To make this efficient when communicating potentially large units of data, Dagger uses a remote reference, called a Dagger.Chunk, to refer to objects which exist on another worker. Chunks are backed by a distributed refcounting mechanism provided by MemPool.jl, which ensures that the referenced data is not GC'd until all Chunks referencing that object are GC'd from all workers containing them. Conveniently, if you pass in a Chunk object as an input to a function using either API, then the thunk's payload function will get executed with the value contained in the Chunk. The scheduler also understands Chunks, and will try to schedule work close to where their Chunk inputs reside, to reduce communication overhead.

Chunks also have a cached type, a "processor", and a "scope", which are important for identifying the type of the object, where in memory (CPU RAM, GPU VRAM, etc.) the value resides, and where the value is allowed to be transferred and dereferenced. See Processors and Scopes for more details on how these properties can be used to control scheduling behavior around Chunks.

While Dagger generally "just works", sometimes one needs to exert some more fine-grained control over how the scheduler allocates work. There are two parallel mechanisms to achieve this: Scheduler options (from Dagger.Sch.SchedulerOptions) and Thunk options (from Dagger.Sch.ThunkOptions). These two options structs generally contain the same options, with the difference being that Scheduler options operate globally across an entire DAG, and Thunk options operate on a thunk-by-thunk basis. Scheduler options can be constructed and passed to collect() or compute() as the keyword argument options for lazy API usage:

Thunk options can be passed to @spawn/spawn, @par, and delayed similarly: